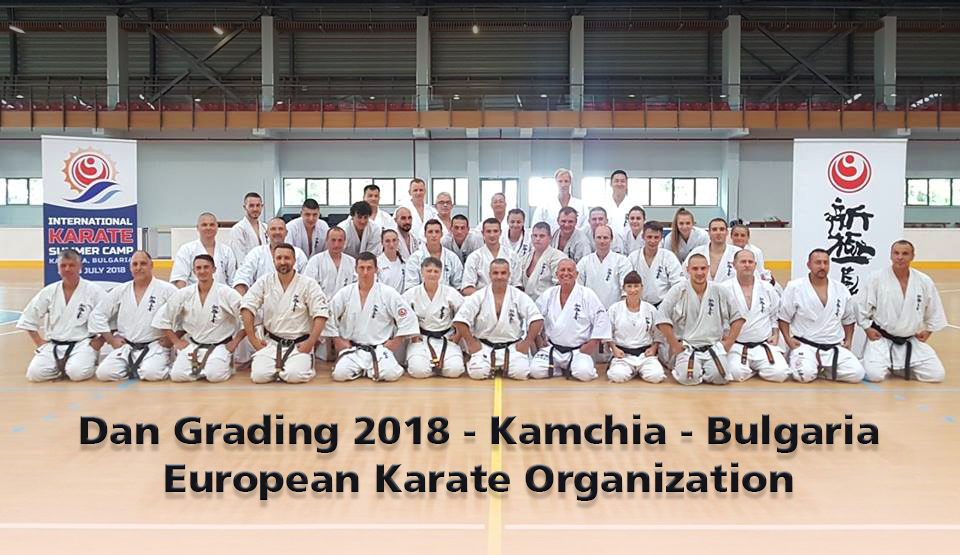 During the camp a European Exam took place, which was carried out by the EKO Grading Committee: shihan Jesus Talan 6th dan, shihan Remigiusz Karpinski 6th dan and shihan Jan Bulow 7th dan.
34 candidates for 1, 2, 3 and 4 Dan joined the exam.

Shihan Koen Spitales 5th dan, shihan Gilbert Cleveringa 5th dan, shihan Alexander Kuzmin 5th dan, who also sheared their knowledge and experience in karate. The organizers – sensei Boris Nikolov, shihan Georgi Popov and the whole Shinkyokushin Federation Bulgaria did their best to make the trainings as colorful as possible providing something for everyone.

The first two trainings included kihon, ido, kumite technique and kata, the evening training was kumite based, except for the group preparing for the grading at the end of the camp. The trainings led by the Japanese shihans lifted the spirit and the motivation of all the participants no matter the age or the grades. During the whole camp the participants were split in several groups: grading group, black belt group, color belts and kids group. The instructors were changing based on
rotational principle and manage to work several times with each group. The culmination for the kids group was one of the morning classes, when shihan Midori and shihan Tsukamoto explained different techniques of karate, which were demonstrated by the youngest guest of the camp Keijiro Tsukamoto – son of shihan Tsukamoto, who in just 12 years of age showed fabulous skills and coordination.

The grading group had the pleasure and honor to be prepared by the shihans of the grading committee which was visible in the results at the grading in the end. The participants in the kumite training had the unique chance to practice kumite with senpai Takashi, who is just 18 years but already in the best four of the JFKO weight division championship.

Traditionally the last night finished with Sayonara party where all the participants in the camp found new friends and had fun, and in the morning shihan Midori gave the participation certificates and presents for the organizers, but before that he made everyone to show their spirit and left them with good memory in the form of muscle fever.
Gratitude and appreciation to the shihans from Japan and Europe, who made everyone feel that they are part of the huge family of Shinkyokushin.