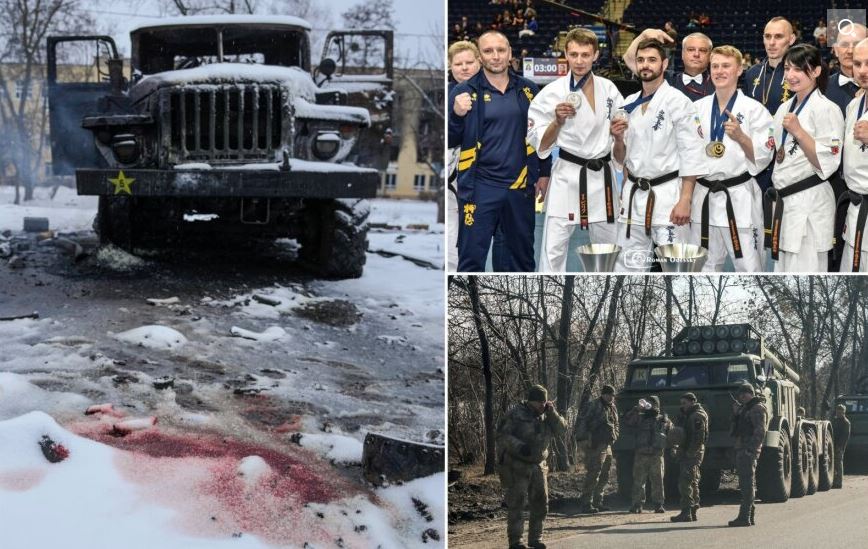 Let’s stand together with Ukraine! 💪

Article and conversation with Ukrainian Karate Federation Leaders about real situation, their determination and courage! 👊They are and example to us and to the entire karate community! ✊
Слава Україні!
Героям слава!
Source www.delfi.lt
More than 31 years ago Lithuanian karate enthusiasts were among the first responders and personal bodyguards of top brass of the Lithuanian Reform Movement during the January events of 1991. Source www.delfi.lt
Before the war there were two and a half thousand students of various ages training at the „Kanku“ kyokushin karate club in Lviv.

According to the club‘s president mr. Sergey Mutin, approximately 15 percent of the club‘s members are adults. And the better part of these adults are waiting for instructions on how to defend their homeland.

„Karate is a way of a warrior. To fight is a natural approach for us. Dojo teachers and senseis are mostly leading by example, however I see that the students honestly believe in the just cause. I am not pressuring anyone, not persuading anyone and not offering anything to anyone – everyone must decide for himself how to act during these trying times.

I can not say what the outcome will be. I am sure, however, that such action will make the advance through the Western Ukraine much more difficult for the russians.“ – 45 year old master of 5th degree explained.

Just as the Russia‘s invasion was launching on a Thursday, competition schedules were replaced by first hand witness stories about the movement of the occupant forces and the ongoing battles.

Plenty of messages asking for information on what to do for them who wish to take up arms.

And soon enough – the first news about the karate fighters who have gone missing.

Mr. A. Korol‘s former students endured an intensive bombardement in Mariupol – an important seaport of the Sea of Azov.

Delfi spoke with the Ukrainian karate fighters on a Thursday evening – just 12 hours after the invasion began.

At the moment, however, we know that some of the cities in the North fell to the hands of the invading Russian forces. We know this, because we have our friends there who report the news to us however the situation is quite futile.“ – mr. S. Mutin concluded about the situation after the first day of the invasion.

Meanwhile, karate fighters living in the biggest city in the Western Ukraine, Lviv, asked for more information about how to organise the self defence groups.

„There was panic at first and a little bit of chaos. A lot of ukrainians are seeking refuge in the neighboring countries. The ones who stayed behind are rallying and arming themselves, however as of Thursday evening there was a lack of instructions of where to go and what to do. We will see after a day or two.“ – said mr. S. Mutin. Source www.delfi.lt
Mr. A. Korol said that the karate fighters are in close cooperation with the resistance organisations working in Lviv. Members of these organisations have combat experience from the 2014 conflict in the Eastern Ukraine.
„We held a meeting with the guys who are responsible for the support logistics. All of these people have been on the front lines and have combat experience. They will consult us and we will join the teritorial defence to patrol our city“ – said president of the FKKU.

There is a number of karate fighters among the military reserve personnel. Some of them have been mobilised as of Thursday evening.

„Around 50% of the karate fighters have served in the Ukrainian armed forces in one capacity or another. Among them – 5th degree black belt Aleksandr Kuzmin, 6th degree black belt Aleksandr Goncherenko. The older generation have been living under a constant threat of war for several years now, majority of us have gone through military training. We will use it to our advantage and help our country“ – noted mr. S. Mutin.

Worried about being „shot in the back”

„I can not talk about the athletes from other sports because we do not keep in touch much. This is a matter of national importance. People are willing to fight, the whole Ukraine is. Otherwise our chances would be slim. Russia has military superiority. Having said that ukrainians want to resist, a patriotic uprising is being felt strongly.

People simply do not wish to live in the Russian world. Such emotions are strongly felt in the Western Ukraine. Even during the Soviet times, Lviv was a specific enclave where the russians were viewed sceptically. It will not be as easy here as it was in the Donbass region“ – mr. S Mutin assured.

However, even in Lviv, mr. A. Korol says people are are afraid of being shot in the back.

„The fifth column is operational even here, also we have a small minority of the russian world lovers. I have seen reports that sabouters have been infiltrated to our region, who of course cooperate with the local colabarants. If a wide infantry attack is underway, we will have to worry about avoiding being shot in the back. These questions are also discussed, we closely monitor the situation.“ – explained the president of the FKKU.

Would the people be willing to leave their homes in Lviv if they were asked to go and protect Kyiv, which is currently under attack?

„Of course, if he have to go to protect Kyiv, people will fight. People are indifferent to where they fight, in the east of Ukraine, Kyiv or their native neighborhood because this is all Ukraine, which is being torn apart by the enemy“,

While the karate fighters are preparing for further defence, their abandoned dojos are populated by the refugees of war who went to the Western parts of the country from the territories where significant battles are underway,

„Thursday we have dismantled the tatami in our dojo, because we received the call that we will need to accomodate 50 kids arriving by train from the Eastern Ukraine. Masses of people are en route to Lviv, Ternopol and other cities considered safer.“ – explained A. Korol.

How long the Western Ukraine can remain the safe haven from the atrocities of war is a question with no clear answer.

No matter how patriotic and willing to fight were the karate fighters interviewed by Delfi, they understood that Ukraine can not win this war alone.

There is a desperate demand for military equipment. Russian weapons are technologically advanced. Ukraine is using weapons remaining from the Soviet times or received from the Western countries, the latter is not enough. The West has to understand that if Vladimir Putin quickly conquers Ukraine, he will be at the doorstep of Poland and the Baltic countries. It is rather possible that these countries will be his next target.“ – explained mr. S. Mutin.